Introducing Rosita - the Teacher of Flamenco 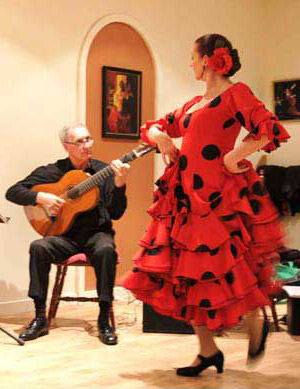 The teacher of Flamenco - Rosina Himing - was born of dancing parents. She had her first ballet class at 4. By the age of 14 she danced the lead part in a Pantomine with Bert Newton where she was discovered and asked to join the cast of JC Willianson My Fair Lady followed by the Sentimental Bloke.

Before she became a Flamenco dance teacher Rosita travelled Europe to dance in the Festival Ballet Company (London), the Blue Bells Co.Lido (Paris, Rome, Madrid). In Spain she fell in love with Flamenco and was trained by Emma Malerios . Rosita danced in the Alfredo's Flamenco Co. in Barcelona and Madrid. Alfredo changed her name to Rosita. While in Spain she also appeared in Samuel Bronstons' Circus World with John Wayne and in several Spanish Films. Returning to Australia to dance with Channel 2, Channel 7 and Channel 10, she pursued her dream of opening her Flamenco Studio and the Professional Flamenco Company "Teatro Flamenco"

In 1990 Rosita's Spanish Dance Theatre was formed to bring to life the Tales and Legends of Spain in Spanish dance. Rosita has since received tuition in Spain with the greats: Matilda Coral, Christine Hoyos, El Junco, Alicia Vega and Bettina Castano. After returning from Spain Rosita formed "Teatro Flamenco". This Melbourne professional company rehearses at Rosita's Southern Flamenco Centre and performs at major venues. Rosita is the Artistic Director of "Teatro Flamenco". In her work as a Flamenco dance teacher Rosita has dedicated her passion to students.